SCALP MICROPIGMENTATION WRONG AND HOW TO FIX IT

Today I shall show you a couple of examples of people who’ve had SMP treatment, and what we’ve had to do, to repair their SMP.

The short answer is YES! So what can go wrong with SMP?
If you’ve got a good technician, someone who’s got experience, and they’re a good artist, you shouldn’t have any problems. The only things that you might say have gone wrong is if someone’s done a few sessions and it’s too light and you want to add more and make adjustments. It hasn’t really gone wrong, it’s just little adjustments that you need to make. You need to go back to your artist and say, “Can we do this, and can we do that?” If you’ve got a good scalp technician, nothing should go wrong, but if you’ve got somebody who maybe they’re a bit lazy, maybe they don’t really care of what they’re doing, or maybe they haven’t quite got the knowledge, then things can go wrong with scalp micropigmentation. This is not about trying to put other people down. This is just trying to give a bit of education so that you can get the best treatment possible.

Here I’ve got an example, it should be coming up on the screen next to me. This is a guy who’s had SMP, he had three sessions. To me, what’s happened is the person who’s done this treatment has been a bit lazy so that it looks like they’ve done it in a rush. You can see there’s a blue tinge really, which is what we call dermal staining. Dermal staining happens when the skin isn’t stretched tight enough and that impression isn’t clean and crisp. When the skin is a little bit looser, or if somebody goes a little bit too deep with a needle, then you can get a stain appearing under the skin. This is what’s happened with this treatment.

Also, if we look at the picture you can see within the video. I use what I call a five-point system to create the hairlines, you might have seen that in one of my other videos. This is what 100% gives you total symmetry. By doing that, we’ve been able to see that the symmetry on his hairline that has been done is totally out. If we just flick to the photos from the side, you can really see how the blending isn’t there and the hairline shape isn’t where it should be. Also, at the front, it’s just all finished together. This is quite a common thing with what you’d say is old school SMP. What I like to do is really soften out the edges and really blend it into a  natural hairstyle.

This is an example of what can go wrong with SMP. Luckily this one was fixable. As we can see in the after photo here, you can obviously see it really clearly. We did have quite a sharp hairline that was way off of its symmetry. After two sessions, I was able to really get in between there on the first session and blend everything out and really helped the blending. Then, on the second session, we just added a little bit more definition. You can see we finished with a nice blend down the sides and a really softened hairline and through the top, instead of that stained look, we’ve got more definition now, kind of like that little grain effects that we like to have. That one was fixable, and it was a great job. My client Lee was really happy with it. We’ll do a little video in here and you can see a close-up of the before and afters.

Feedback from Lee post SMP correction from the video:

Lee: Check out how it was before and then check it out now. Spot on, Marc. Brilliant. I would recommend you to anyone.

Marc: Let’s have a quick zoom in, stay there. Turn your head to the side for me. Back to the middle. Over that side. Nice. Cool, back to me. Happy?

This is your classic shaped up hard-edged style that you see with Scalp micropigmentation problems. What’s gone wrong here? Somebody’s gone a bit too fast and they’ve layered with two darker colours on top of each other too much. Again, the skin hasn’t been stretched enough, you’ve ended up we’ve dermal staining and you’ve just got one sheet colour all the way over. Also on the front edge where you’ve got that shape up, what happens, what can go wrong if the technician or the artist keeps finishing in the same area on every session, then you end up with a little rim going around. That’s what you want to avoid.

How to fix this type of SMP

The way to avoid that is, each session, as you get into this front inch is to really make sure that you stretch and really make sure that your technique is a little bit lighter at the front and you can spread it through and sprinkle it out. Even with a sharp hairline, you still need it to finish in a soft way. All right. What we’ve done with this client was I readjusted the hairline, used my own five-point system, so we knew 100% we had symmetry, and then we could see what room we had for manoeuvre. The client wanted a bit of a softer appearance, but still with the same kind of shape.

If we have a look at the after photo, what we’ve done here is go with darker flex all the way through the top to give it a little more definition and a bit more grain. At the front, we’ve added a little but still maintained that nice shape, but we’ve just softened it out and really tried to create a rougher, softer finish, but still with that nice shape. On the side profiles as well, we had to adjust them because they were at different angles.

We managed to save that one. I thought it might need laser, but we managed to save it. If SMP goes wrong, there are ways in which you can fix them. I hope you’ve enjoyed these couple of examples that I’ve shown you. We can get into loads of detail about this, but that’s just a couple of examples of how it can go wrong, but how it could be fixed.
All right, I’ll see you next time. 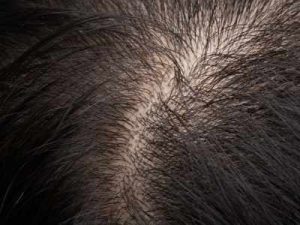 The way we look and present ourselves to the world is incredibly important for our mental health and overall sense of wellbeing. A huge part of the way we look and express our personality is through our hair. So what happens when women suffer from alopecia and thinning hair? What happens when women no longer feel able to hide their thinning hair and surgical treatment is no longer an option? One non surgical option is that of scalp micropigmentation.

Below we explore what scalp micropigmentation is and why so many women are now embracing this type of treatment when they have issues with their hair. Scalp micropigmentation for women really is a great solution for female hair loss and alopecia. In essence, it is a guaranteed way to boost your self confidence and to live life to the fullest once more.

What exactly is scalp micropigmentation?

Scalp micropigmentation, also known as SMP, in simplistic terms is applying tattoos to the scalp. This permanent pigmentation is used on those areas of the scalp where hair has been lost, or where hair is very thin. It can also be used on areas of scarred skin. Trained tattoo artists conduct this treatment that is a permanent solution to give the appearance of a full head of thick hair.

Why many women opt for this treatment?

Let's start by stating that scalp micropigmentation works very well with long hair, making it a great option for women who have hair loss. Initially, it was created for use on men's bald scalps, but today it has so many benefits for women. It can be used to cover and then hide any bald spots, making it suitable for female pattern baldness. It can also be used on a receding hairline to give the appearance of hair growth. Thinning hair can also be made to appear thicker when a slightly darker pigmentation shade is used to that of your natural hair colour.

It won't damage your scalp or long hair

Many women worry that scalp micropigmentation will damage their long hair, but this simply isn't true. The treatment focuses only on the scalp, as the specially trained tattoo artist works around the hair follicle, so the needle does not touch the follicle. This ensures that your hair will not be harmed. It is also important to know that the needle is very short and only permeates the skin to a shallow depth of 2mm, meaning that the procedure will not affect any new hair growth in the future.

Here at Creative Scalps we offer scalp micropigmention for women. If you would like to know more about how we can help you and to book your free consultation, then please don't hesitate to get in touch with us today.